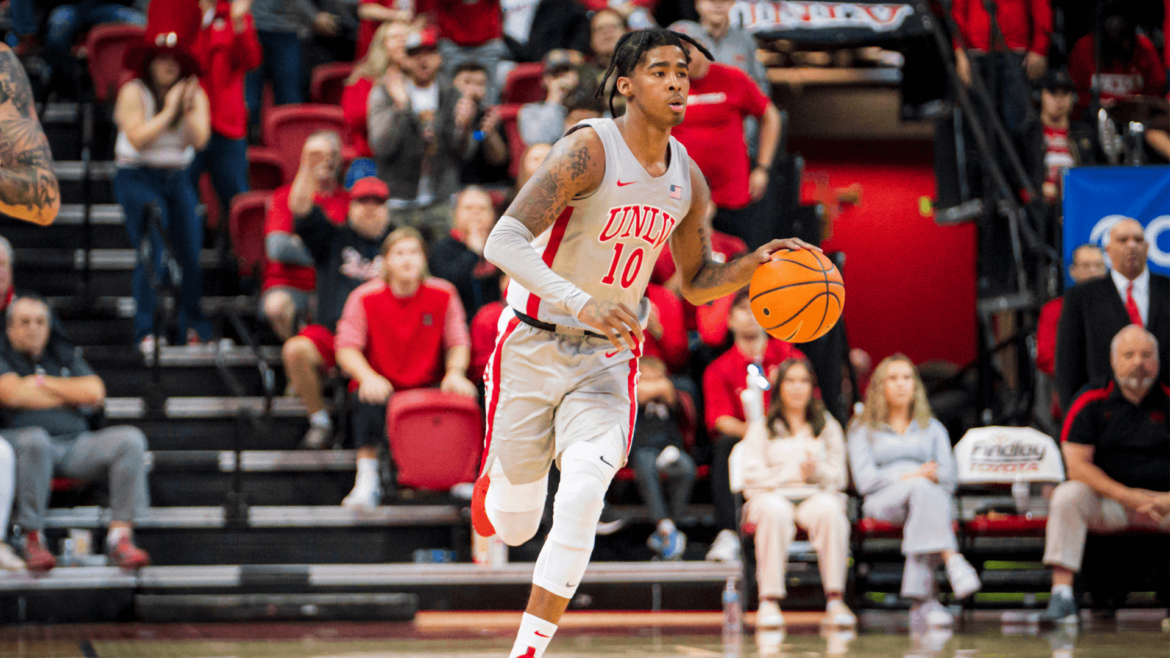 The UNLV men’s basketball team (12-4 overall, 1-3 Mountain West) remain home this weekend to host its second straight game at the Thomas & Mack Center against Colorado State (9-9, 1-4) on Saturday, Jan. 14 at 4 p.m.
CALVERT CEREMONY: Legendary “Voice of the Rebels” Dick Calvert will be honored at halftime in a ceremony that will include the revealing of a banner in the rafters.
LAST TIME OUT: In its last outing, UNLV was defeated by defending MW champion Boise State (13-4, 3-1) on Wednesday night at the Thomas & Mack Center, 84-66. Three Runnin’ Rebels scored in double figures, led by Keshon Gilbert’s 14 points. Justin Webster added 13 and EJ Harkless contributed 12.

ABOUT THE OPPONENT: Colorado State comes to Las Vegas having lost five of its last six contests. Its lone win over that span was at home against Fresno State (79-57). The Rams are coming off a home overtime loss to Air Force on Tuesday night (85-74). CSU is 1-4 in true road games this season. The Rams have four players averaging in double figures led by Isaiah Stevens (17.5 ppg). He has only played in 11 games as he was out with an injury. The others are John Tonje (13.4 ppg), Patrick Cartier (13.3 ppg) and Isaiah Rivera (10.5 ppg). Tonje is the team’s leading rebounder (4.9 rpg), while Stevens leads in assists (6.0 apg). Cartier is the conference’s leader in field-goal percentage (.653, 9th in the nation). The Rams lead the conference in field-goal percentage (.494, 12th in nation), assists (18.11 per game, 10th in nation) and assist/turnover ratio (1.78, 1st in nation), while they are third in 3-point shooting (.371). Last season, CSU was 25-6 overall and finished second in the MW with a 14-4 league mark. The Rams lost in the first round of the NCAA Tournament to Michigan, 75-63 and David Roddy was selected as the No. 23 overall pick in the NBA Draft. This season’s team was picked to finish fourth out of 11 in the MW’s preseason poll with Stevens being named to the Preseason All-Conference Team. CSU’s 16-man roster includes 11 upperclassmen. The Rams are coached by Niko Medved, who is in his fifth year at the school with a record of 86-55 (.610) and in his 10th year overall as a collegiate head coach with a career mark of 165-142 (.537).

TICKETS: UNLV men’s basketball season ticket pricing has been adjusted for the 2022-23 season, with affordability and family-friendly value at the forefront of the changes. Tickets may be purchased online at UNLVtickets.com, on the phone by calling 702-739-FANS (3267) or in person at the Thomas & Mack Center Box Office.

BROADCAST INFO: Saturday’s game will be televised nationally on CBS Sports Network with Chris Lewis and Bob Wenzel calling the action. Jon Sandler, former Runnin’ Rebel Curtis Terry and Steve Cofield (sidelines) will handle the UNLV radio call, which may be heard live on ESPN Radio 1100 in Las Vegas. All streaming links and live stats will be available at UNLVRebels.com and through the UNLV Rebels App.