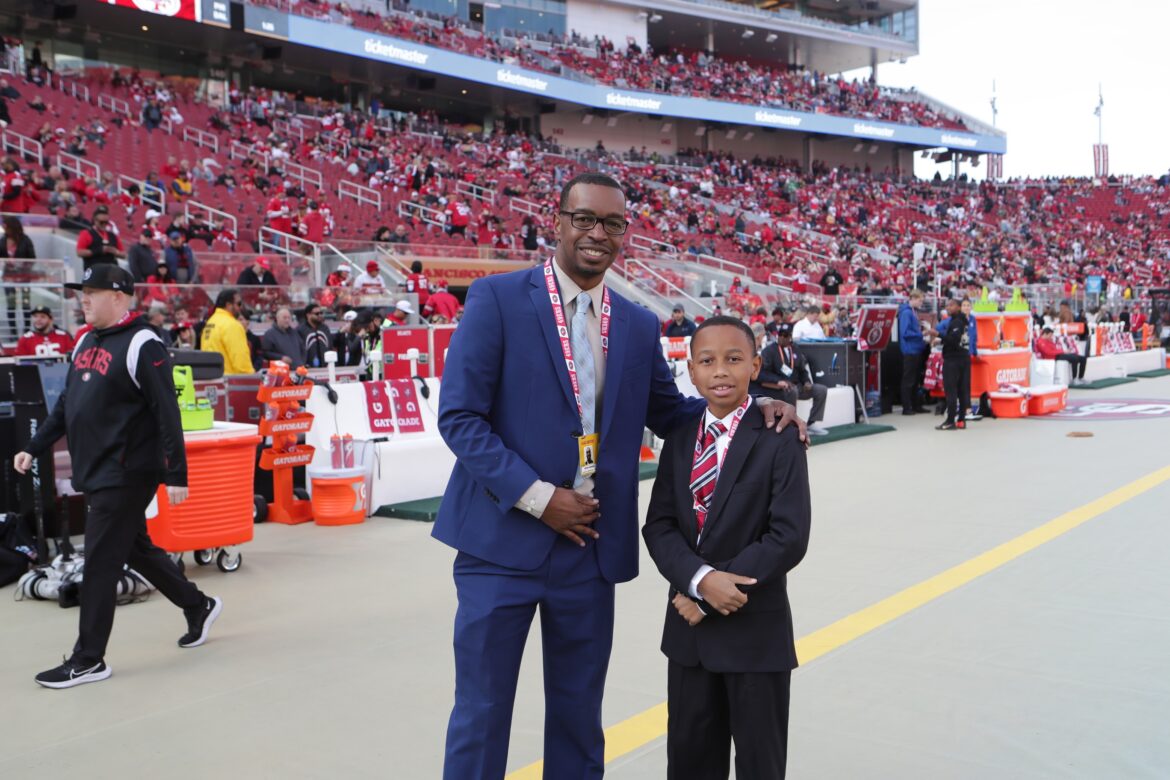 In the wake of what this Martin Luther King Jr. holiday is all about, we want to introduce you to the story of a Las Vegas, Nevada native that dared to dream and follow that dream above all to make that dream come true.

The excitement of the Winter/Christmas break is one of the best times of the school year. The two-week vacation usually entails vacationing, visiting family, friends and ahh yes, Christmas presents. That is how it normally goes for students, especially elementary school students. It was a little different for Walter Bracken Steam Academy of Las Vegas, Nevada, fourth grader, Piper Johnson (10). Piper decided to follow a dream. He is an aspiring public relations (PR) professional in the sports industry, following in his father, Keyon Johnson’s footsteps.

Piper’s father works with The Five Time Super Bowl Champion San Francisco 49ers, The Seven Time NBA Champion Golden State Warriors and The Three Time Super Bowl Champion Las Vegas Raiders (PR) departments. Piper was brought in to each organization as additional help to each team’s public relations department for an ultimate game day experience. During the experience Piper learned what public relations is and the importance of (PR) to a sports organization and how the department can benefit the media.

“This experience was awesome,” said Piper Johnson. “I learned a lot about the ins and outs of how a sports organization works, the importance of public relations to the team and the media. I really enjoyed it because it gave me a chance to work with my dad and meet some really cool people along the way.”

Piper says meeting NFL Legend Jerry Rice was “by far the best experience of my life.”

This opportunity came when Piper reached out to his father, curious about what he does for work. Keyon Johnson (Piper’s father) who works with each of the team’s public relations department on gamedays, thought explaining his responsibilities to Piper would possibly get confusing, so he decided to show him.

“Some of the language may be a little confusing to him without him being able to see what was being explained,” Johnson said. “So, I thought it would be awesome to show him while, myself and other public relations pros can explain it to him. Thanks goes out to the public relations staffs of the Warriors, 49ers and Raiders.

When I approached them with the idea, they agreed that it would be awesome to get the youth to understand what public relations means and its importance. Together, we set it up time for Piper to work while he was on his winter break.”

How did Piper perform at the job with the responsibilities he was asked to do?

He exceed the expectations of all of three PR departments. He displayed professionalism, with a personality that impressed the staffs, coaches, players and most importantly the media.

“I was so impressed with Piper’s abilities to just adapt, his drive, his smile and his thoughtfulness to help in the media room in whatever way was needed.” said Associated Press Sportswriter, Golden State Warriors beat. @Janie McCAP

“He got the microphones going, handed them off and kept the order of the press conference. He had so much effort for a 10-year-old to be doing this job already with such ease, confidence, and thoughtfulness. It was so much fun to see and so lovely to work with him. The coaches and players noticed it as well. It was really fun to have him at the Warriors game.”

The dream of Martin Luther King Jr., while is not where it could be, it is definitely a lot better than what it used to be. The dream of little boys and girls playing, working and living amongst each other no matter the color of the skin, texture of their hair, or the accent of their tongue is becoming normal while a few short decades ago this was only a dream. Piper’s story would only be a folktale if for not the courage of the great Dr. Martin Luther King Jr. and for that we thank and celebrate him and everyone who dared to dream and live the good dream.