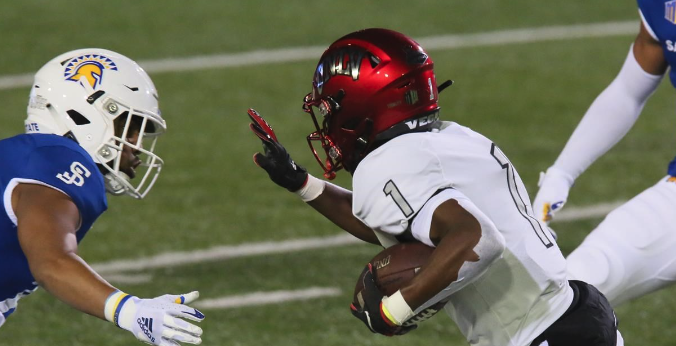 Today marks one week from the day UNLV football coach Marcus Arroyo was let go following his third straight sub-.500 season and another year without a bowl opportunity.

It doesn’t sound like a long time, but the clock is ticking … because today is the day the transfer portal opened for business. Players from across the country are filling the twitter-sphere announcing their intentions to leave their current school in search of a new, and hopefully better, opportunity.

The problem is, without a head coach, the Rebels are at a big disadvantage in that they can’t really seek out new players … and are in danger of losing some as well.

Williams just completed his third season with the Rebels. He was Mountain West Conference Freshman of the Year in 2020. He had two years of eligibility remaining, including an extra COVID year. This season, he caught 40 passes for 541 yards and five touchdowns.

McKinney just finished his freshman year, but still has four years of eligibility. He’s a local product out of Coronado High School and was rated a three-star recruit by 24/7 Sports and ESPN. He was the No. 140 high school tackle nationally and 16th overall player in Nevada.

Another top player, Adam Plant, announced he won’t use his extra COVID season and will enter the NFL draft. That was most likely going to happen anyway, but it’s possible a new coach could have convinced him to stay.

The lack of a head coach has also lost the Rebels of three-star quarterback recruit Ty Diffenbach, one of the top 10 quarterbacks in California. On Monday, he announced he was decommitting from UNLV. Shortly afterwards, he was offered a scholarship by Pitt.

But the transfer portal works two ways, and not having a coach makes it difficult to try and recruit players from the portal. So far, Mountain West Conference rival San Diego State has already made offers to at least two players in the portal, including Cal linebacker Owen Patu.

Last year, the Rebels were able to sign star running back Aiden Robbins from the portal. The Louisville transfer led the Rebels 1,011 yards rushing and scored 10 touchdowns despite missing a couple games with injury. Guys like this don’t last very long in the portal.

It’s not just the lack of a head coach, but the internet speculation about the “frontrunners” are all over the map. A couple days ago, it seemed the choice was going to be Kevin Sumlin. Then it was Mike Stoops. Both were former University of Arizona coaches. Today, a published report stated former LSU coach Ed Orgeron was one of the contenders along with former University of Washington and Boise State coach Chris Peterson. At least we know now that it won’t be Deion Sanders.

Last Monday, it didn’t seem like the search was going to take much time. There’s been a lot of names out there and at this point, the school administration needs to pick one. The clock is ticking.