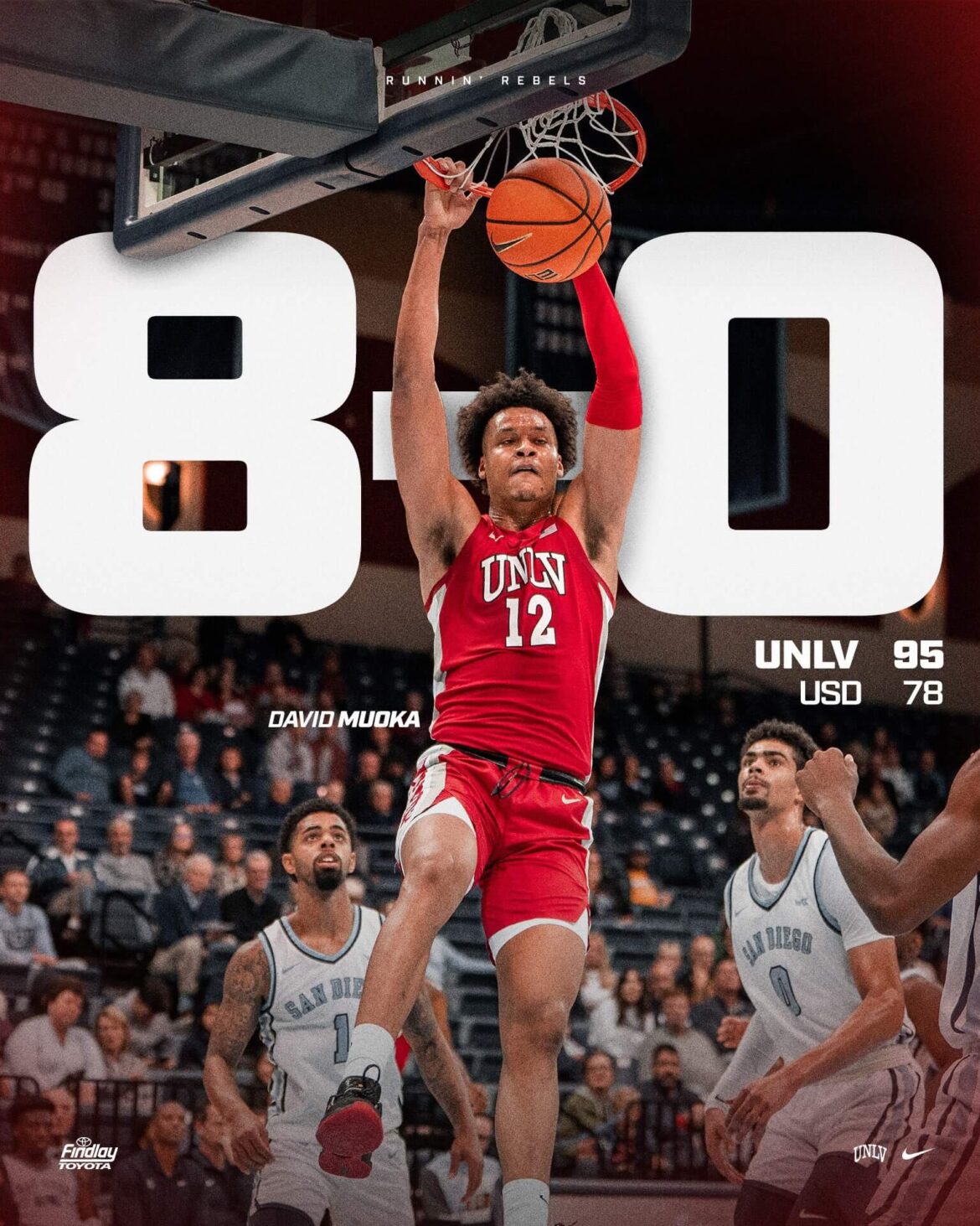 SAN DIEGO – The UNLV men’s basketball team (8-0) was dominant in its first true road game of the season recording a 95-78 victory over San Diego at the Jenny Craig Pavilion.

The Runnin’ Rebels remained perfect through eight games, marking their best start to a season in 11 years (2011-12).

TURNING POINT: Trailing 14-12 early in the contest, UNLV used a 13-0 run over 2:30 to take a 25-14 lead with just under nine minutes until halftime. The Runnin’ Rebels then took a 12-2 spurt into the break to lead by 21 at 49-28.3-POINT GOAL: UNLV made 13 3-pointers on the night, which marked its second-highest total of the season.DOUBLE-FIGURE STEALS: UNLV recorded 10 steals in the game, marking the fifth time this season it was in double figures in that category.

QUOTABLE: “Tonight showed our growth. They are having fun right now. We had a week layoff, which was a concern. We weren’t sure how we were going to handle that, but our success has been a result of how hard they are playing defensively. We had guys doing a really good job running, getting to good spacing and creating good looks for each other. I think they had a lot of fun out there tonight.” – UNLV head coach Kevin Kruger.

– David Muoka pulled down a team-high eight rebounds with eight points on 4 of 4 shooting with a season-high four blocks.

– Keshon Gilbert dished out a game-high-tying seven assists without committing a turnover.

– Webster made all four of his 3-point attempts.

– UNLV forced USD to commit 17 turnovers for the game. UNLV has forced all eight of its opponents into at least 17 miscues this season.

– UNLV led in bench points 38-20 with 28 of those coming from Webster and Johnson III.

– UNLV has made at least one 3-pointer in a NCAA-record 1,169 straight games.

NEXT FOR THE RUNNIN’ REBELS: UNLV will host Hawaii at the Dollar Loan Center in Henderson on Wednesday, Dec. 7 at 7 p.m. For tickets, visit TheDollarLoanCenter.com.