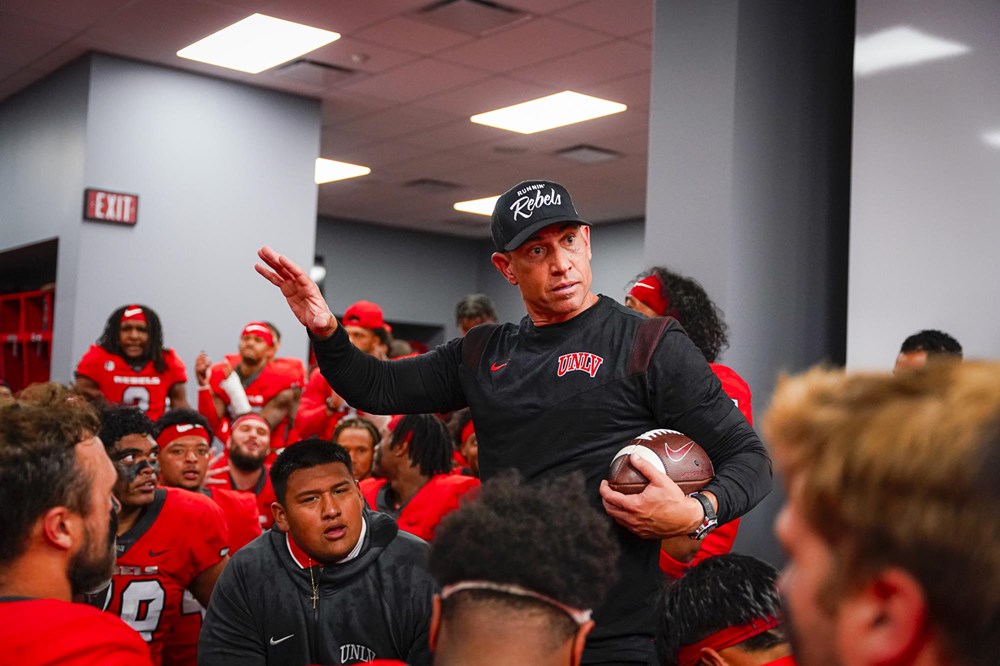 In September, UNLV football fans were worried that at Power 5 Conference team might come calling to UNLV to poach head coach Marcus Arroyo to greener pastures. The Rebels were 4-1, having won twice as many games as the previous two seasons combined.

Fans were calling their travel agents to get them ready to book flights and accommodations for whatever bowl UNLV would make for the first time since Jan. 1, 2014.

But after Saturday night’s loss at Hawaii, those bowl dreams are now dashed. The Rebels lost, 31-25, as an 11-point road favorite to a team that entered the game 2-9. It was the Rebels sixth straight loss. More importantly, UNLV won’t be able to reach the six-win mark necessary for bowl eligibility.

After the game, Arroyo said, “Frustration is an understatement.”

Well, that’s true. For the team and the fanbase.

Now the big question isn’t “How are we going to keep Coach Arroyo from getting away?” to “How can we get rid of this guy?”

The answer is most likely not that quickly. Arroyo will be able to quiet some of his critics with a win at home over rival UNR. Fortunately, while UNLV has been a big disappointment, they are a juggernaut compared to this season’s Wolf Pack.

UNR is 2-9 on the season and has lost nine straight. Of course, the Wolf Pack has a decent excuse for their ineptitude as they had their successful coach poached … and he went and grabbed many of their best players too.

There are plenty of fans calling for change, but a second-straight win over Wolf Pack and keeping the Fremont Cannon red is probably enough to keep Arroyo from having to send out resumes at least for another year.

Finances may be the reason Arroyo will probably be around after this year.

He still has two years and $3.15 million remaining on the five-year contract he signed before the 2020 season. Arroyo is the third highest paid coach in the Mountain West Conference. He made $1.5 million in each of his first two seasons — with two total wins to show for it — and $1.55 this season.

He will be paid another $1.55 million next season an $1.6 million in 2024. If he is fired, he will be owed 75 percent of what remains on his deal. So, if fired after this season, he will be paid $2.36 million. Then the UNLV administration will have to find and pay another coach on top of that.

I’m guessing writing that check is something UNLV’s administration would rather not do and an argument that the Rebels won five games and beat their biggest rival is actual progress. From an outsiders perspective, that spin is pretty believable.

Of course, all bets are off if the Rebels lose to the Wolf Pack.