As the regular season winds down, every game takes on a greater importance. This Sunday is no exception as the New England Patriots travel to Las Vegas and take on the Las Vegas Raiders at Allegiant Stadium.

The Patriots’ postseason hopes hang in the balance and they need to put together a strong performance to keep their playoff dreams alive.

Meanwhile, for Raider nation, this matchup with Mac Jones and the Patriots offers an opportunity for them to gain momentum towards a possible .500 season. Both sides are sure to bring their best effort which means fans of both teams can expect an exciting battle come kickoff.

The Patriots vs. Raiders Over/Under is 44.5 total points for the game.

Based on recent trends, the winning team model predicts the Raiders will win this Week 15 game with 57.0% confidence. Come back soon for expert’s picks and predictions.

You guys have three starters who would be eligible to come back from IR this week; Darren Waller, Hunter Renfrow and Divine Deablo. Do you feel good about their chances to maybe get out there and practice today?

Coach McDaniels: “Divine, no, just based on the situation relative to the surgery and those kinds of things. So, no, you won’t see him out there today or this week. Hunter and Darren, you’ll see them out there. So, we’ll start the clock today. Again, whether or not that’s going to turn into activating them to the 53 this week or not, we’re going to have to see how the next few days go. I mean, both of them are coming off of injuries. We haven’t really seen them practice in a while in regard to how those things are going to respond to those kinds of things. So, we’re going to get them out there and we’re going to kind of evaluate how it goes. We’re hopeful, but obviouslywe are going to let their bodies tell us a lot her as we go through thenext three days.” 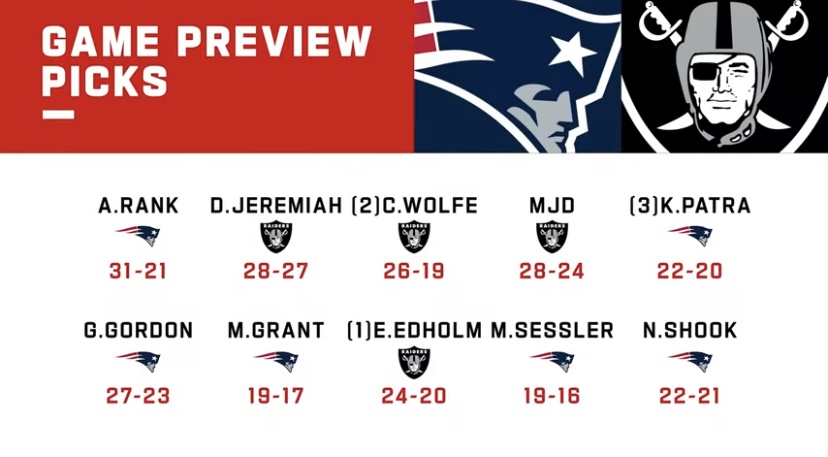 Kenny King, Vegas Sports Today: “Every week is a must win for the Raiders as they close out the season. The offense needs to showcase what they have to offer for next season and defensively the Raiders need to see what areas they need to improve. As Josh McDaniels faces off against his mentor, look for the Raiders to pull out all the stops to seal a victory.”

Kirk Kern, Vegas Sports Today: “Patriots. Raiders are back to being a mess again.”

Louis Grasse, Vegas Sports Today: “I like the Raiders with the points.”

Mike Dixon, Vegas Sports Today: “The Raiders are (3-2) at home, and that is where most of their wins come from. Josh McDaniels knows Bill Belichick very well, he downplayed coaching against Belichick this week, but let’s be real. McDaniels and the Raiders need this win more. Raiders over Patriots.”