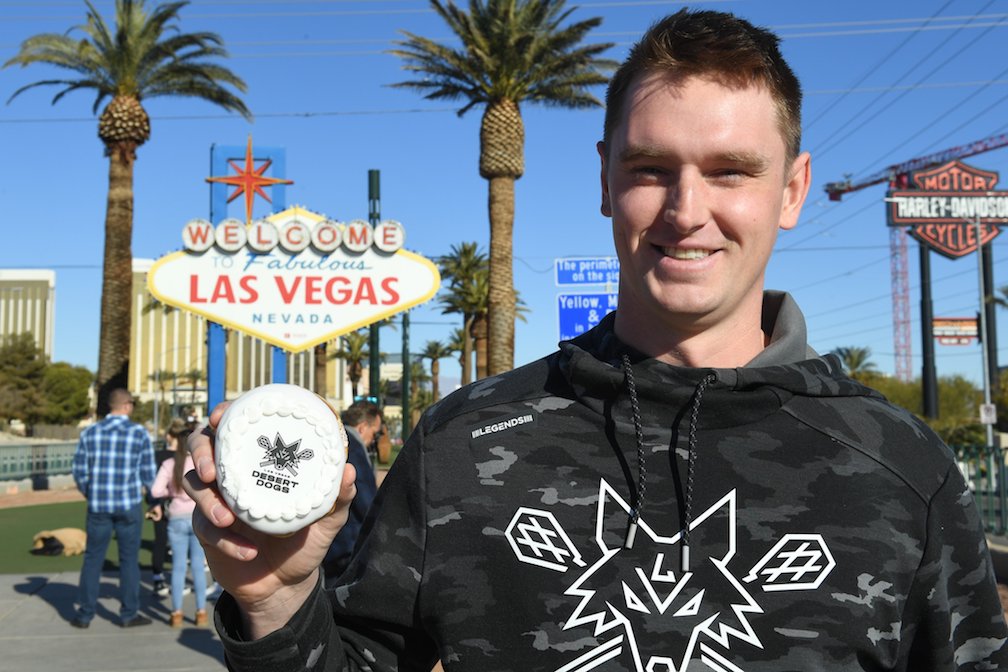 The lights of the Welcome to Fabulous Las Vegas sign are changing colors to mark the inaugural  home game and inaugural season of the Las Vegas Desert Dogs professional lacrosse team.

“Lacrosse is an intense, fast-paced sport, one that I’m sure Las Vegans will embrace when they get to see the Las Vegas Desert Dogs in action,” said County Commissioner Michael Naft, in whose district the team plays at Michelob ULTRA Arena at Mandalay Bay Resort & Casino. “I congratulate the Desert Dogs organization on their success and foresight in making this inaugural season a reality and I wish them luck in their home opener on Friday. This is further proof that Las Vegas really is the ‘Greatest Arena on Earth.’”

“We’re excited about the Desert Dogs’ inaugural home game and season,” said Commissioner Justin Jones. “It’s incredible that we have yet another professional sport to add to the menu of options available to residents and visitors to enjoy. I encourage everyone to show up and support the home team.”

“The Welcome to Fabulous Las Vegas sign is an iconic landmark that we’re thrilled to have decked out in our colors,” said Las Vegas Desert Dogs CEO Mark Fine. “We are committed to growing the game of lacrosse here in Las Vegas and spreading Desert Dogs pride all across the valley. Our inaugural team can’t wait to put on a show at Michelob ULTRA Arena this Friday night.” The team will take on the Panther City Lacrosse Club at 7:30 p.m. Information on tickets, season ticket packages, group tickets, merchandise and camps may be found at LasVegasDesertDogs.com or by calling (702) 818-DOGS.

The lights on the welcome sign will change to the team colors of yellow, magenta and blue. Other team colors are black and white.

The Desert Dogs were launched on June 21, 2021, as the 15th team in the National Lacrosse League. It is co-owned by Wayne Gretzky, Dustin Johnson, Steve Nash and Joe Tsai. The team is playing 18 games in the regular season, which runs through April, with nine home games at Michelob ULTRA Arena. All nine of the Desert Dogs home games are being played on either Friday or Saturday nights. Its first game was Friday night against the Panther City Lacrosse Club in Fort Worth, Texas, in which the Desert Dogs dropped a tight 13-11 decision.

The Desert Dogs 25-man roster is led by veterans Rob Hellyer, Zack Greer and Travis Cornwall.  The team is committed to creating an environment in Las Vegas for the creator’s game, lacrosse, to thrive, which has included:

• Desert Dogs pinnies donated to every youth lacrosse player in Las Vegas in spring 2022; and

•  An open clinic to the public this past July with more than 200 kids in attendance; and

•  A donation of 40 lacrosse goals to parks and community fields throughout Clark County; and

• A donation of 500 sticks to elementary schools throughout the Las Vegas valley this fall.

Lacrosse is the oldest organized sport in North America, having originated with native communities who  played it as early as 1100 AD. The game served a significant spiritual role in the life of the tribes for many years. The game’s goal was to bring glory and honor to the participants and their tribes and was said to be played “for the Creator.” It is often referred to as “The Creator’s Game.”

The Welcome to Fabulous Las Vegas sign was created in 1959 after the Clark County Commission approved funding for the project on what was then Highway 91. Submitting the lowest qualified bid was Western Electric Display, Inc. (aka “Western Neon”), purchased by YESCO in the 1960s.  The design, characteristic of the Googie architecture movement, was created by Betty Willis. The 25-foot-tall sign was listed on the National Register of Historic Places in 2009, Clark County’s centennial year. The sign, like the rest of the Las Vegas Strip, is in unincorporated Clark County.