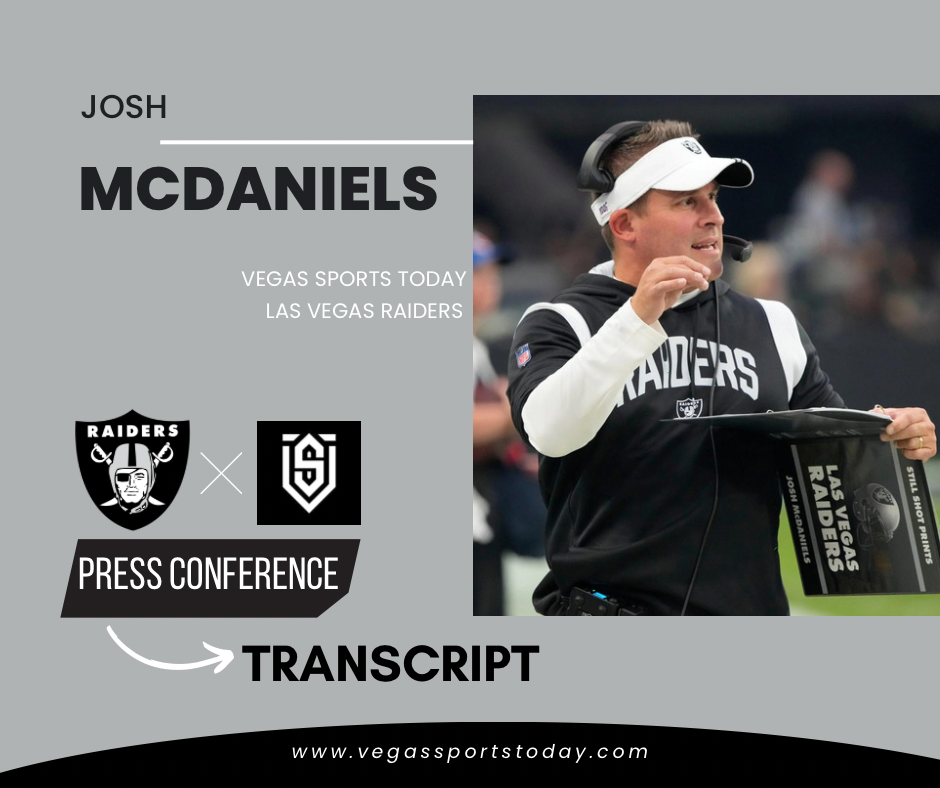 Opening Statement: “So, kind of like what we said yesterday, this was kind of a grind it out type of a game.
I thought we got some critical plays in each phase, wasn’t perfect by any stretch of the imagination. I
thought we got off to a decent start, and then after Dylan’s [Parham] injury, we were shuffling again inside,
and really had a harder time blocking them in the second half, there and really trying to establish ourselves
at the line of scrimmage.

They got some pressure on us in the pocket too, so didn’t really get a lot of
rhythm and positive plays in the second half and we’re fortunate that we were able to put together the
two-minute drive there at the end to tie it. Defensively, I thought we got off to a decent start again, and
then we were better in the pass defense, certainly, than we were in the run game. And so there are
certainly things to look at, and fix, and try to shore up for ourselves. But I thought we tried to do a decent
job of playing down there in the red zone. We were able to create some long yardage situations during
the course of the game, get off the field with our third down defense, that I thought was pretty good. And
then in the kicking game, which we knew this was going to be a huge challenge, I was proud of the effort,
and also the execution of some of the things we’re trying to do. I thought AJ [Cole] had a really good day;
really gave them one ball to return there, I want to say it was in the second quarter; maybe late in the first
quarter.

Just really the one ball that he had a chance to return. And he brought it back maybe 15 yards.
But I thought we covered decent, thought he punted really well, we tried to really limit you know Marcus
Jones’s ability to impact the game. And I thought for the most part, our guys did a good job there. And I
thought we did a decent job of trying to create some field position on the kickoff return. Ameer [Abdullah[
ran well; I thought, other than the one we had the penalty, we gave ourselves a chance to have some
good field position. So, really battled them in the kicking game, which we knew was going to be a
challenge. So, at the end of the day, it comes down to turnovers. It kind of ended up even at the end of
the day on it, and then situational football. We were able to put it in the red zone, and keep them out,
and obviously be able to stop them in the four-minute defense, get the ball back, and then able to put
together a two-minute drive there to tie it. So, all those things are huge, and they ultimately, create the
result. So, fortunate enough that we made just enough plays to win.”
Q: When you get to the point where you guys were at guard, a couple of guys haven’t been playing that
position or haven’t even been in the building. Does that have to be managed sometimes with your play
calling?

Coach McDaniels: “It does. And you never want to say that it’s okay to punt the ball on offense. I mean,
as being a former offensive coordinator, and somebody who’s, obviously, very involved in that side of the
ball. But there are times where the game dictates that you got to be smart versus trying to do too much.
I thought those guys battled their butt off, and we certainly – that was not the only reason why we didn’t
have more success as the game goes on. And again, they deserve a lot of credit. That’s a really good front,
obviously; it’s a really good defense. But yeah, communication, I thought was okay. I thought just in
general terms, you just got to be smart with what you’re attempting to do there. You got to know who
you’re out there with, and how long they’ve been here, like you said, and what their limitations might be.”

Q: You had a lot of penalties yesterday, do you think the offensive line rotation and guys being out there
for the first time in a while, do you think all the moving parts contributed to that?

Coach McDaniels: “There’s really no excuses. I mean, we all know that snap count to be having those
types of issues now. And again, we’ve had some cleaner games recently. And then all of a sudden, to have
as many as we did yesterday hurt us the way that they did and put us in long yardage. There’s no excuses
for those. We need to be able to go out and call a play in the huddle, break the huddle, and get to the line
of scrimmage, and snap the ball without penalty before the play clock’s down. So, no, we can’t do that –
not inconsistently play good offense.”

Q: You’ve talked about the process a lot, so when you’re 14 games in, and that is happening, how does
the process deal with that?

Coach McDaniels: “Well, first of all, it doesn’t happen every game. So this isn’t something that’s happening
every week. But, for me, if it happened in week one, I would be pissed. You know what I mean? So, it’s
not something where it you need 12 games to fix it. The reality is, is it’s a fundamental aspect of playing
offense, defense, or special teams – playing without committee penalties. And we’ve talked a lot about
it’s hard to win until you stop from losing, and penalties, obviously, are a way for you to hurt yourself and
your team. So, we don’t coach them, we’re going to continue to coach the right techniques. We harp on
that; you guys obviously saw us running laps and all that kind of stuff in training camp. That doesn’t stop.
So, we just got to go back to the fundamental part of executing the snap and not committing a foul prior
to it. There’s no shortcut to it, though.”

Q: Being able to have Darren Waller and Hunter Renfrow at the end of the game, it looked like maybe
the snap counts were being managed throughout the game. Is that something that you guys can
change?

Coach McDaniels: “It should change. I mean, I was sensitive to it a little bit yesterday. And also, I think,
like I said, I think Foster [Moreau[, and Keelan [Cole], and those guys – and you guys have seen them all –
they’ve earned the right to be in there, too. Different roles and different things. So, those guys all do
different things well, and they’re not all the same player. So, we definitely were kind of keeping track of
that. Obviously, Hunter handled the returns yesterday and I thought he did a decent job there at creating
some field position. He had a big third down catch. Darren made a couple of big plays, obviously in the
passing game, and you’re hoping that we can now progress that as we move forward.”

Q: Yesterday after the game you said that was the most insane ending that you’ve ever dealt with. After
a game like that, how much is there traction from your inner circle people saying, ‘Man that game was
crazy.’ How does that work in your life?

Coach McDaniels: “I mean, probably same way worked in your life. I mean, people texting you. I have
friends and family that obviously thought that was just about what it was – crazy. We didn’t do a whole
lot other than take advantage of something that was presented to us in that last situation. I don’t want to
take too much credit for that. We were trying to hopefully go to overtime, is what we’re trying to do. And
so, I thought Chandler [Jones] made a really good individual play at the end of the game. But relative to
communication, and all that stuff after the game, I’m sure it was very much like you guys. Holy cow.”