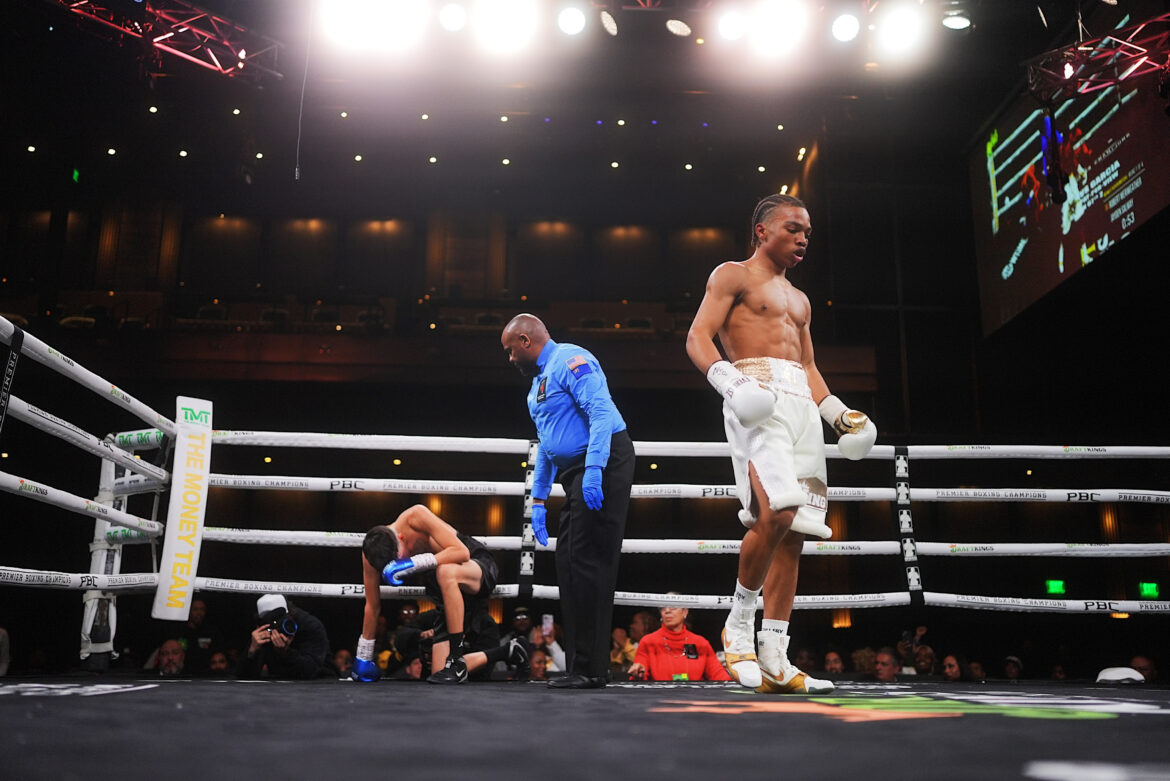 Prior to the action, the boxing world celebrated the retirement of the legendary referee Robert Byrd. The Sin City native, whose roster touts countless beloved boxing matches over his 35-year career, including the second-highest-grossing PPV of all-time Mayweather vs. McGregor, stepped in the ring to accept an award by the Nevada Boxing Athletic Commission and thanked the boxing world for their support throughout his career.

Fans witnessed an absolute slugfest in tonight’s Sin City Showdown main event between Kevin “Thunderstorm” Johnson (12-3, 8KOs) and Cristian Baez (19-2,17KOs). Baez jerky style forced Johnson to fight on the defense most of the night. Johnson found some success with his punch accuracy and power punches. Judges ruled the bout 96-94, 97-93, 97-93 in favor of Cristian Baez.

Baez stated, “I’m content with the judge’s decision because it was a very tough fight I’m not going to lie, but we did our best in the ring and came out with our arm raised.”

The co-main event saw an action-packed showdown between super welterweights Micky Scala (7-0, 4 KO’s), who remains undefeated, and Ricardo Villalba (20-7-1, 8 KO’s). Scala didn’t let Villalba’s veteran status deter his game plan, starting the fight emphatically with power shots to the body. The Argentinian felt the brutal power of Scala’s right hand and uppercuts throughout the night. Villalba stood strong, fighting back with relentless exchanges of his own, but not enough to pull a victory. After six rounds of boxing, judges ruled Scala with a unanimous decision win.

“I give myself a B+ because I didn’t get him out of there. We knew going into this fight he was a durable fighter,” said Scala. “I fought great and got a shutout decision, and that’s what I intended to do. I was able to slow him down with the jab, I felt I was working really well. We’re not looking for easy matchups; we took the fight knowing he wasn’t an easy opponent. I’m gonna get back home and enjoy family time for the holidays. Then I’m back in the gym working.”

Seventeen-year-old super featherweight, Robert “King” Meriweather III (3-0 2 KO’s), made his U.S. and Mayweather Promotions debut in knockout fashion. Meriweather wasted no time clearing his opponent out in at the 2-minute and 9 seconds mark of round 1. Fighting out of the boxing capital of the world, Meriweather showcased his slick style, speed, and power, the same skillset that first caught the eye of Floyd Mayweather, who discovered Meriweather at Mayweather Boxing Club when he was eight years old.

“Game plan went great and went how I had planned,” said Meriweather. “He broke down, I could see the fear in his eyes, and he got a little timid and scared. I went in for the kill and took him out of there.”

“I rate my performance a B-,” said Benton. “The decision went like I wanted, but I feel like I could’ve let my hands go a lot more. I’m going to get back in the gym and work on my conditioning and most importantly learn to let go of my hands more